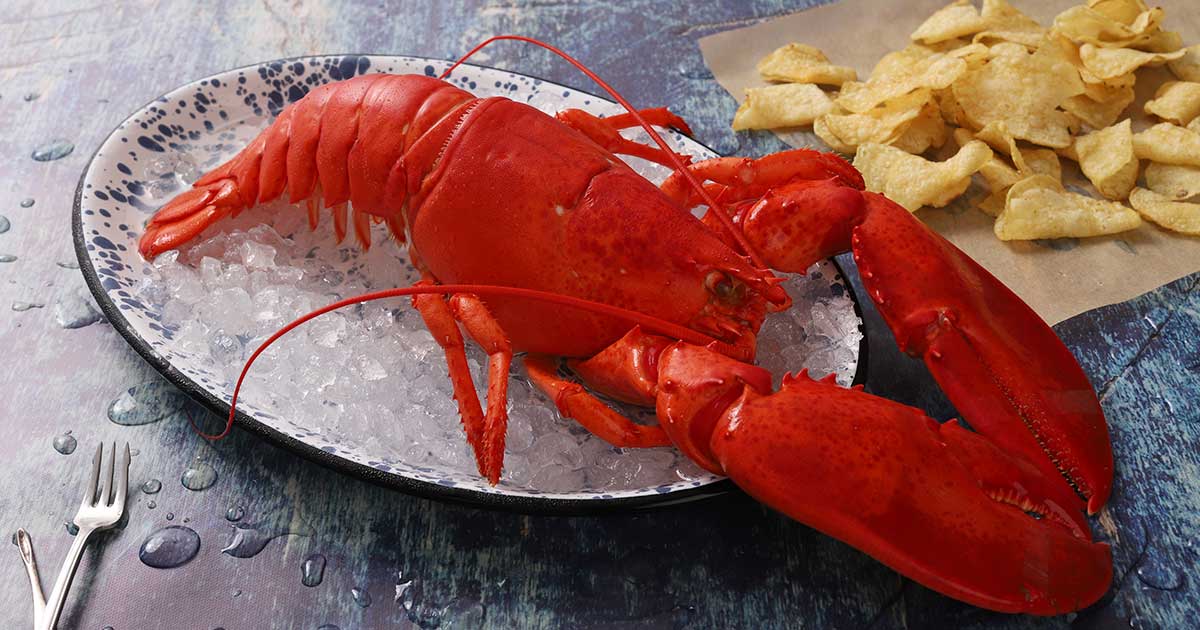 How to store live lobsters

Lobsters live in the ocean, not in a lake…so they are most comfortable in their native home: saltwater. Lobsters should never be placed in freshwater (or really, even saltwater that’s not oxygenated). Fresh water will kill the lobster. But they can live up to 24 hours out of the water, if cared for properly.

Live lobsters can be kept or packed in wet newspaper or seaweed, if available. When you purchase or order them – and for longer periods – in a cooler with frozen gel ice packs.

When you bring your live lobsters home or receive them in the mail, keep them in the wet newspaper and put them in the fridge to keep them cold. The cold, wet environment will cause the lobsters to become slow and sluggish, but they’ll keep just fine. Never freeze live seafood.

This is exactly how to keep your live lobsters until you cook them. Lobsters can be stored in the fridge for up to 24 hours before cooking; but have a plan prepared so that you cook them as soon as you can. The fresher, the better!

What to do if your lobster dies

Should they die and you’ve kept them cold, you can still cook them.

According to State of Maine food safety experts, dead lobster can be consumed safely up to 24 hours from time of death, if refrigerated properly at or below 38°F (the temperature of the average home refrigerator).

Your nose KNOWS! If the lobster smells foul, sulfury, has an ammonia odor, or the tail meat is mushy, it has spoiled. Throw it away immediately.

How to handle live lobsters

Cooking live lobsters isn’t the only intimidating part about them: they’re alive and those claws are pretty scary!

Never fear: at Pine Tree Seafood, we ensure your safety by “banding” the lobster claws before you purchase. When you order live lobsters, you’ll find their claws are held shut with strong rubber bands.

It’s best to leave the bands on, despite the temptation otherwise. The pincher claws can draw blood quickly and cause infection. The crusher claws, with their powerful ‘slow twitch’ muscles can easily break finger bones and do not release even when the lobster dies or the claw is separated from the lobster’s body.

When transferring a lobster, always pick it up by the body (the large back shell just behind the head), avoid the claws, and never pick it up by the tail. Instinctively, when picked up, the lobster will arch its body, wave its claws, and/or flap it’s tail wildly…needle sharp edges and spines can cut you.

Why do lobsters need to be cooked live?

Like other fresh shellfish, lobsters naturally have loads of bacteria inside and on their shell. (And you thought your biome was complex.)

So…in short, unless you’re a trained sushi chef or you’re a fan of playing what a Chef friend of ours calls “Culinary Roulette”…always, always, always, cook your lobsters live and at the appropriate time and temperature.  Properly cooking lobster will result in killing nearly 99% of all pathogens.

How to cook live lobster

The time has come to enjoy your tasty Maine lobster! Whether you are a fan of steaming or boiling, experts agree that either will give similar results. (However, we’ve found it’s more difficult to overcook and have less water on your plate if you steam your lobsters.)

NOTE: We leave the rubber bands on during cooking, it’s safer, but if you must remove them (some folks swear they can taste the rubber!), hold them by the body in one hand (like you just learned) and grab both claws carefully by the elbow joints or “knuckles” with your other hand. This will disable the lobster from pinching you. Then cut the bands off with scissors and carefully drop directly into the cookpot.

NOTE: Lobsters are without a central nervous system of sensors and receptors.  Until it’s proven otherwise, the vast majority of lobster scientists (including Maine’s own Lobster Institute at the University of Maine) agree, they do not feel pain. But they likely do have sense for water temperature. They are ocean ground dwellers that prefer cold water; so when they get in water, they’ll flap their tails to swim away from you and get to the bottom of the pot and more hospitable temperatures.

NOTE: Lobsters are without a central nervous system of sensors and receptors.  Until it’s proven otherwise, the vast majority of lobster scientists (including Maine’s own Lobster Institute at the University of Maine) agree, they do not feel pain. But they likely do have sense for water temperature. They are ocean ground dwellers that prefer cold water; so when they get in water, they’ll flap their tails to swim away from you and get to the bottom of the pot and more hospitable temperatures.

Once cooked, if you find you cannot eat the lobster right away, simply pick the meat from the shell. Cooked lobster meat can be stored in an airtight container in the fridge for 4-5 days or several months in the freezer.

Follow this ultimate guide for cooking live lobster and you’ll be a pro in no time!

Ready to cook live Maine lobster? We have everything you need, including fresh caught lobster right from the Maine bay in our own backyard.

Start a Pick up order Start a Delivery order